This is an assignment for class Video and Sound, when brainstorming about ideas, we thought this could be an interesting adventure to make a documentation about Williamsburg, which is a cool place in Brooklyn, NY. It is ongoing a big change throughout the years, which process is called – gentrification. 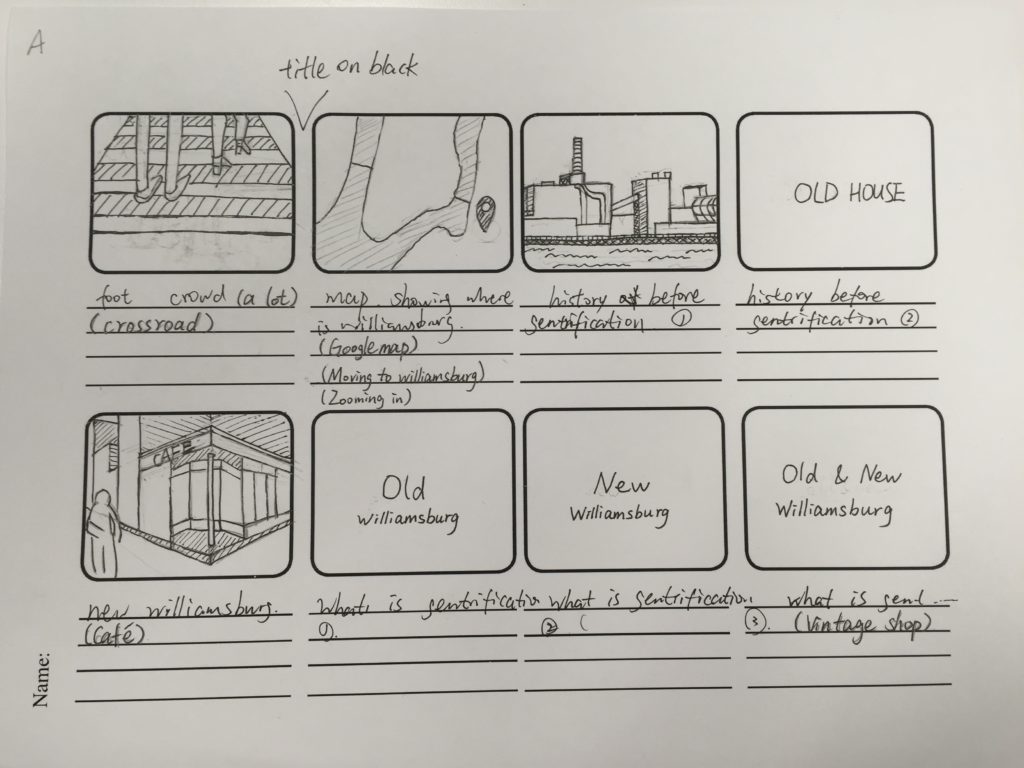 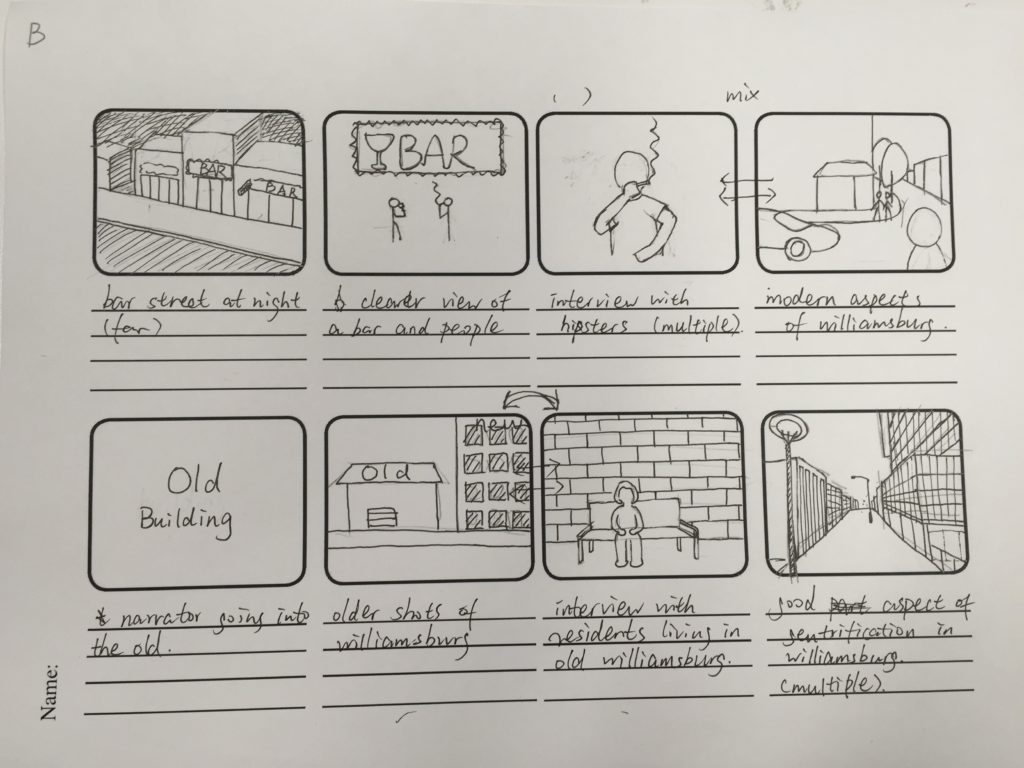 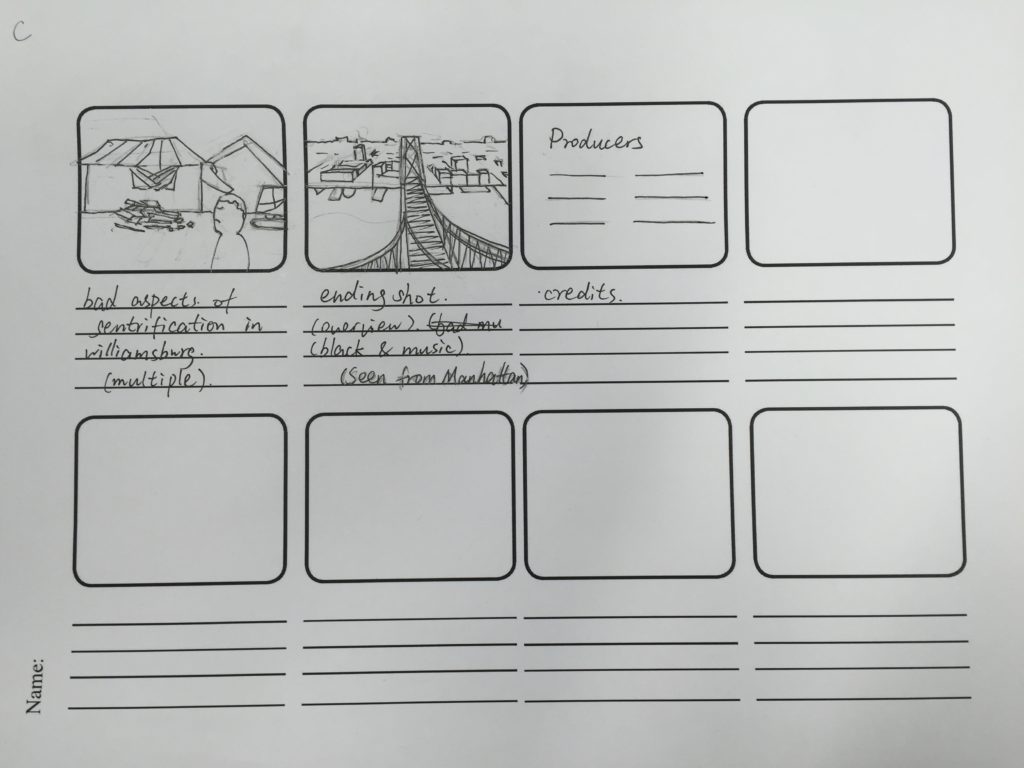 We went around Bedford Ave a couple of times to find some typical places for the gentrification phenomenon. Basically we were looking around for old and new buildings.

It was so nice to know that we could borrow 5Ds and tripods from our E.R. It felt really magical starting to make them work and looking around through these great tools.

Regina wrote the great script and had the voiceover by her boyfriend.

The thing is when we came to think about the script, we found some of the scenes missing. And also we needed to interview some locals for their opinions.

This time we didn’t hang around aimlessly at all. We gathered each of the missing footage according to the script.

As for the interviewing part, things started really hard. We were around the Bedford Ave metro station, started nervously finding someone that seemed not that in a hurry. But whoever we asked all kindly said, “Sorry”, because they all had something to do, waiting for someone, heading to someplace… We were a little discouraged.

But then we thought about the park we went weeks before, where there were some tall and new buildings in construction. It’s a new and clean park at the riverside, people there felt quite relaxed. People there should be not that busy and maybe more open to talk. We were right. It turned out that people there were so kind and so willing to talk. They provided us a lot of interesting sayings that fits in to our script perfectly. We felt quite relieved, feeling like everything that seemed so hard is not that hard when you find the right way to open it.

Another magical thing is, Williamsburg seen from Manhattan, and seen at night, were so different from our inside view during daytime. Standing around Stuyvesant Town, not only can we see the whole Williamsburg bridge, something interesting is clear to your eyes like, the Domino Sugar Factory standing side by side together with the tall and luxury building named the Edge 11211. With the old building under deconstruction, the new building thrives. What a typical depiction of the gentrification phenomenon.

Walking around there at Saturday night, the Williamsburg suddenly became so trendy and popular. You’ll never know what’s inside and old and shabby house, unless you come near the door and surprisingly hear the exciting music and find a bunch of cool young guys playing DJ, and your view of the old house changed forever. Every block there was a bar, and every bar was so bright and full of people drinking and laughing together. On the streets there were lines of young people chatting around walking to their destination. Suddenly some drunk girls walked in front of my camera started making funny poses. What a wonderful place! I could hardly believe this was the old and lonely Williamsburg I knew during daytime.

When doing the editing, I was a little disappointed for there could be some great footage at some time but I couldn’t remember where. So instead of seeking luck I looked at all of the footages and marked down each in sequence. Sarah was right as for naming each sequence could be of great help.

The final cut worked so hilariously together with Nicola’s music, less strict as without the music, and introduced some more optimistic and playful attitude toward life.

According to Sarah’s comment and classmates’ feedback, our first version of video contains some scenes too quick for the audiences. I should know that the feeling was different from mine as I have already seen my footages hundreds of times, but my audience was new to that and needed more time to understand. Also some classmates told me it was great to match the visual to the voiceover, but it could feel quite intense to do that for always. We neutralized these effects thereafter in our final video. 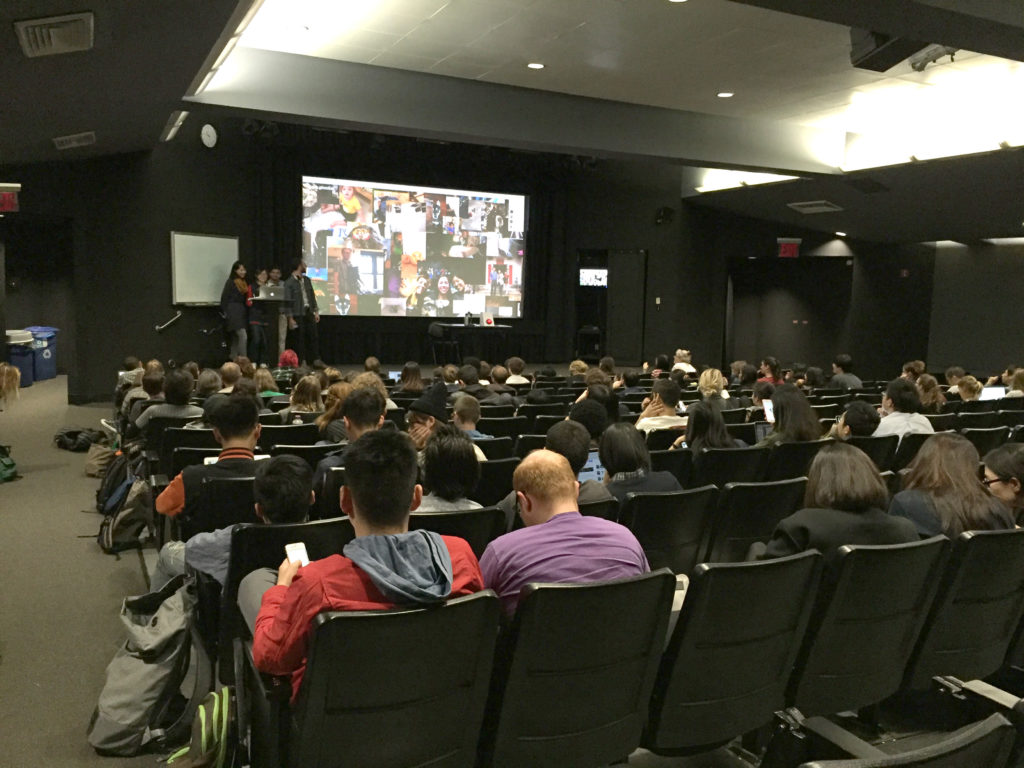